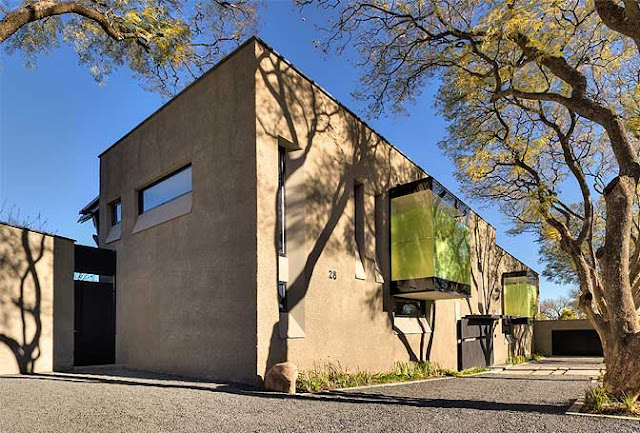 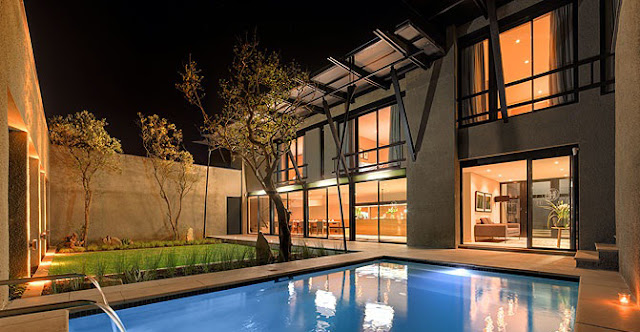 The brief entailed the creation of a boutique hotel with the comforts of home, and where all the functional requirements of the most demanding business professionals are addressed during their stay; space efficient design is key in order to maximize the use of a relatively small site.

The hotel, commissioned by private developer-hoteliers, is located in the leafy suburb of Craighall Park and offers an honest and modest approach to architectural design. Within close range of major amenities, the hotel has seen a large number of patrons during the world cup, catering for business and leisure-seekers. Because of the residential context wherein it is located, the hotel is designed to look like a house. However, its placement on the corner of a busy connecting street demands that attention be given to the noisy activity of passing traffic. Inspired and not constrained by this, the design does not shy away from the street, but rather creates a presence that demands recognition from the public.

The building itself is the boundary wall to the public domain and responds to the need for security and privacy accordingly. The facade consists of long narrow windows that cannot be climbed through when open and bay windows that project past the building edge into the “street”. These elements create variety on the facade and their perceived random placement relates to interior layouts. The main entrance is secured by a built-in gate that allows views through the building lobby and into the swimming pool courtyard. During the day, the gate is left open, creating the impression that the public and private domains are encouraged to spill into each other.

The building is located on a small stand and consists of a linear plan with two wings. The ground floor forms the semi-public area of the hotel with the lobby between the dining room on one side and board rooms on the other. Patrons use the boardroom as their private meeting venue, affording them perfect convenience. Continuous flooring between indoors and out has been used to emphasis the flow of space between the ground floor living areas and the garden. The large roof overhang defines this transition “stoep” 3-dimensionally while also protecting the facade and regulating the internal temperature. From upstairs it frames the beautiful Highveld sunsets that grace Johannesburg.

Two densely planted private courtyards are used for functions and recreational space and are landscaped in such a way as to give the impression that the site is larger than it is in reality. Rainwater is directed through custom-designed rainspouts into the garden and water is used to generate calming white noise. The first floor consists of 6 private suites with en-suite bathrooms, a feature of which are the “bathtub” bay windows that make the rooms more spacious. The interior is designed for different uses with a large degree of overlapping. The main living areas also host private functions, while the open plan kitchen is available to patrons for their own use, emphasizing the idea of a “home away from home”.