A ROAD TRIP TO THE NORTHERN CAPE part 1

Elzette and I departed, heading north from Cape Town, at six o’clock in the morning. Our final destination Kagalagadi Transfrontier Park, however we had a couple of stops planned on our way there.  The first one Klein Pella Guest House, in the vicinity of a town called Pella, approximately 700km from Cape Town.  From Here to Upington will be another 233km drive where we figured on kicking back and relaxing on the banks of the Orange River for a day.


We will be staying with Ronel our dear friend owner of Riverplace Guest House.  Then the three of us would drive to the Kgalagadi Frontier Park, for an overnight stay, and some much needed game viewing.  Most South African’s cannot survive for an entire year without venturing into the bush.  In other words, we the people of the rainbow nation need a yearly fix roaming amongst all of South Africa’s cohabitants, and that definitely includes creatures big and small - our wildlife means the world to us. 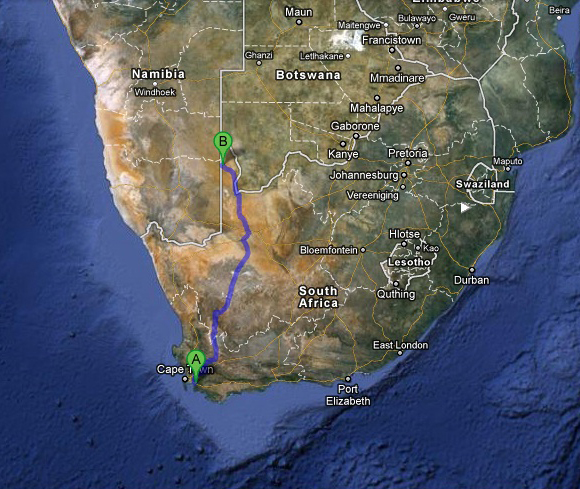 From Cape Town we took the N2 to the R44 to R304 then R45 and it merges with the N7 - the main route.  We were on the road for most of the day, making pit-stops here and there to check places out we normally pass on the way to Namibia.  We reached the town of Springbok around lunch time, where we bought “biltong” (jerky) South Africans favorite snack, water and stretched our legs.  Then we were back on the road following route 14 now through Goegap Nature Reserve.   Unbeknownst to us Klein Pella was approximately 21km off the main road on a very shabby gravel and sand road, here we go again.....

About “Klein Pella” it’s an 18,000 ha stunning farm belonging to Piet Karstens.  Upon meeting Karstnes, President Mandela had this to say: "I heard a lot about you," Said the President, “You are the kind of farmer we need to make our country prosper."  The Karsten Group owns eight fruit farms along the Orange River, all located over a distance of 300 km’s from Klein Pella in the west to Roepersfontein near Upington.  The total land irrigated by Karsten Boerdery (Pty) Ltd is; 866 ha of which 618ha consists of Table Grape vineyards, 87ha of Date orchards, 50ha of Citrus, 84ha of Raisins and 27ha of Melons and Water melons.


Besides the fact that I drove over a Thorn Tree’s branch on the river bank, causing a puncture in my front tire, whilst in search of things to photograph, we had no other car troubles.  Thankfully, it was immediately taken care of by two wonderful men, part of a 500 men/woman workforce on this farm during harvest.

Elzette and I headed for Upington the next morning after a hearty breakfast.   Our fist town, once we made it back on route 14, was Pofadder, this little town, the bud of many Afrikaans speaking people’s jokes; especially when someone is trying to describe a place where nothing ever happens.

We arrived at Ronel’s place around lunch time and it was truly a joyful reunion; after all the three of us have been friends for more than 40 years.  We had lunch and then were shown to our gorgeous rooms facing the river.

Tomorrow Elzette, Ronel and I will continue on our road trip heading for the Kgalagadi Transfrontier Park, 265km from Upington.  Check back with us soon at www.travelandtradesouthafrica.com for part 2 of our adventure and the night of hell....
Email Post