ELMO SW(ART) – as in ART - was quoted in Design Magazine SouthAfrica, “I don’t believe there is a hierarchy in art – architecture is not superior to fine art or to photography.  When that which the sense perceives is deconstructed, one always finds an underlying essence that has the power to inspire.  This resonating force usually leaves a lasting impression and has the ability to shift paradigms.”

A quaint three-bedroom thatch cottage, nicknamed swallows’ nest, was to expand to add a new main bedroom, two studies’, a multi-use entertainment space and an art gallery.  Although the form of the new extension has an initial simplicity one soon realizes that there’s a layer of complexity that gives each room its own volumetric personality. Neil’s study has a vertical gothic-like drama that links with the adjacent African Flame’s branches, reaching upward as an imaginary stairway. Liesel’s study has a more self enclosing horizontal emphasis, forcing her experience out into the Kloof valley. The bedroom celebrates the junction of all elements and escapes through a linking tunnel to a bathroom/closet space set within the existing roof.

The new linear gallery forms part of an open-ended channel formed by the wrapping of the floor-wall-roof to visually connect the entrance driveway with the Kloof valley on the opposite side. Descending down Kloof Falls Road, the structure also acts as a picture window to frame the old African Flame’s stature.

In having to deal with a two level municipal restriction the fluid merging of floor, wall & roof gave the opportunity for a technical “grey” area and our 3rd level could be approved under the description of a “loft space”. 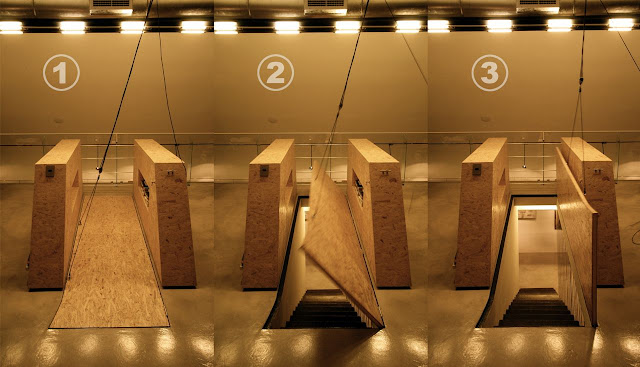 Transformation, fluidity and explorations on “to attach” were cognitive ideas that had to be formalized. On the more subversive / subliminal side, a hybrid parasite has claimed its presence.

A sense of paradox is achieved in the adding of a structure clearly separate yet attached, unique yet familiar. Decisive comment is delivered on the complexity of transitional space - two diverse genres joined paradoxically by constructing a union while simultaneously embracing a tangible tension.

The merger was realized by introducing episodes and imports that conserved the nuances of their source and origin. They also obtain an entirely new impact founded in their composition that seems to come together by means of collage - an assembly of associations distorted to breed a new typology.

SW(ART) ARCHITECTURE Photography and everything in between
Elmo Swart
elmo@phform.com
Email Post