My Dearest Friends, I’m back from Namibia clocking 6,600 on the speedometer and over 800 images on the Canon. Namibia is 318,259 square miles with a population of only 1.771 million. It is bordered by South Africa to the south and southeast, Botswana and Zimbabwe on the east, Angola on the north, and the South Atlantic Ocean on the west. You can drive for hours and hours on end without seeing a single building, car or person only animals and I just loved it. Let me begin at the beginning.

I departed Somerset West, in my Jetta following my friend Elzette and her husband Ronnie in their 4x4. We were in no rush and decided to spend the first night on the South African side of the boarder. We stayed in a town called Springbok, in the Namaqualand district (world renowned area for the wildflowers that pop-up everywhere for as far as the eye can see).


I have learned from my previous road trip with the Nell’s (Elzette & Ronnie) how to properly prepare for such a journey.  I had a flask of coffee and dry rusks (a typical S.A. dry biscuit that we dip in our coffee).  We often pull-off to the side of the road for a break, stretch our legs, wee-wee (behind a bush) drink coffee, take a few pictures and then saddle-up and get back behind the wheel.  We departed Springbok well before sunrise and reached the boarder crossing by 10:00 am en route to Keetmanshoop.  Here Ronnie would leave Elzette and I (the closest town to their ranch) while he continues on to their farm called “Gocharus”, another 150 mile drive on a very bad dirt road.  Elzette and I booked into the “Bird Nest Hotel” had a nap, and left for the Quiver Tree Forests before sunset.  These 300 year old trees are indigenous to Namibia.


Right next to the Forest was the “Giants Play Ground” and here we saw rock formations that looked as if it were carefully assembled by gigantic men.  We wondered around until after dark and then stopped by a friend of the Nell’s on our way back to town.  Here we watched in utter bewilderment the guy order his pet warthog to bed.   This cute little fat creature was so obedient and even got tugged in for the night under his warm blanket.

We had a delightful dinner and turned in early.  The next morning we bough supplies for it would have to last us for sometime, because who is going to volunteer to drive back to town for anything when it is 150 miles away and that on a very bad dirt road, not I.

I had a wonderful peaceful time at Gochrus.   Elzette and I power walked every morning in the bitter cold under clear blue skies and I breathed mouthfuls of the freshest air.   It warmed up during the day but the nights and mornings were oh… so cold.   Elzette baked bread, and we ate fresh farm produce, barbecued meat from Gochurs’s livestock, and our cow’s milk was still warm in the mornings when we received it, that’s how fresh it was.  Gochurs is 33 thousand hectare and stretches into the Kalahari Dessert with its gorgeous red dunes.  We took many drives up and down the dunes and no game farm goes without a bit of hunting.  Here they frown upon you if you take aim at game less than 200 meters away, hence the telescopes. 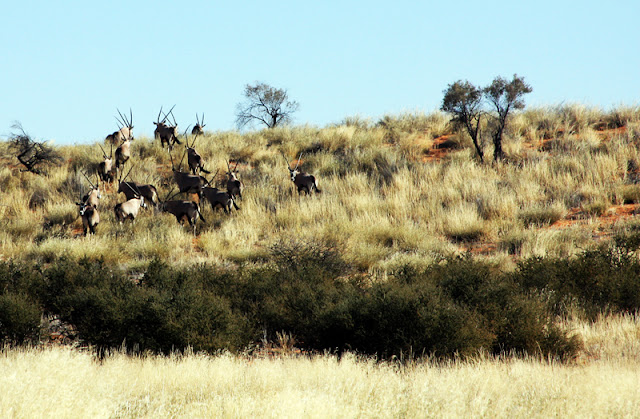 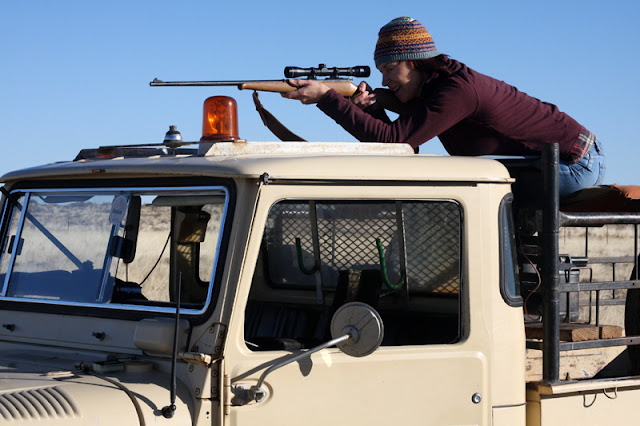 The following images were taken at Gocharus the day before Elzette and I departed on our road trip to the West Coast of Namibia.