TRAVEL SOUTH AFRICA A LETTER FROM AFRICA PART 3 No. 3

I woke up at Crocodile Bridge Camp in Kruger National Park. Unbeknownst to me, at this hour, was the fact that I’d come within 2 feet of a 12 foot snake before the day was done.

I had to meet up with my friend Elzette and her husband Ronnie in Komatipoort; known as the warmest town in all of South Africa, reaching temperatures of 50° Celsius (122° F ) in summer. Ronnie’s passion for vintage cars was the reason we were meeting here. Just outside Komatipoort, on a beautiful farm, you’ll find Herman Nel’s Old Car Haven Museum. This farm is approximately 5 km from the Mozambique boarder and 56 km from Swaziland boarder. It’s here in Herman’s museum after returning from a drive, in one of the old cars, that Herman, Elzette, Ronnie and I were chatting and enjoying a cocktail. Ronnie was sitting on a wall and reached back to place his empty glass behind him (notice where he placed the glass in the image) right next to this 12 foot (3.65 meter) snake.


There was sheer pandemonium because all Herman and his wife Mari’s pets where in danger from having this boa constructor swallow them whole, so everyone was scurrying around trying to get all the pets indoors away from the snake.  Ronnie was doing remarkably well for having been the person sitting right next to the snake, which made a hasty retreat as nightfall was to its advantage.  Wherever we went that night and the next day, we were all on the lookout for that creature for nobody was keen on having another sighting.

We stayed on the ranch for two nights in Herman and Mari’s wonderful bed and breakfast.  Then on the morning of the 20th, with our coffee flasks filled and our wonderful egg sandwiches made from homemade farm bread, we set off for Swaziland.  Entering at the border town of Manangua we drove approx 209 Km (130 miles) to Lavumisa were we re-entered into South Africa and now we were in KwaZulu-Natal home of the Dragensberge or the Zulu name Ukhahlamba "Barrier of Spears" 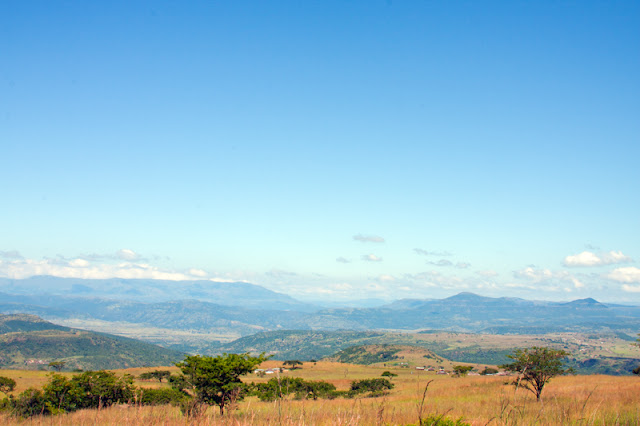 Approximately 10 Km from Swaziland we drove through a small town called Pongolo, it was just picturesque, and I wish we had more time to explore this area.  However, we were heading south approximately 45km outside of a town called Vryheid (Freedom) towards the Battlegrounds of Blood River; so called due to the colour of the Ncome River turning red from blood.

This battle was a major conflict between the Voortrekkers (Dutch and other settlers) and the Zulu tribe on December 16, 1838. http://en.wikipedia.org/wiki/Battle_of_Blood_River   Getting to the museum was a bit of a drive and we made it just in time before closing; due to the late hour we were the only visitors.  I was quite overwhelmed as I treaded tenderly on this sacred ground; keenly aware of the blood that was spilled here of those heroic men on both sides, each having their own unique odds stacked against them; the Voortrekkers were outnumbered 470 men against 10,000 – 15,000 Zulus and the latter had spears whiles the other side had guns and two cannons.


We stayed over in Dundee that night at the “BattlefieldsCountry Lodge.”  The next morning we visit Talana Museum set on 20 acres of battlegrounds; this time the fight was between the English and the Boer commandos, in the Anglo Boer War, of October 1899. http://www.talana.co.za/Battles_of_the_area/Talana/talana.html

From there we went to Rorkes Drift where 139 British soldiers, many wounded and in a hospital, fought a gallant battle that lasted 2 days against 3,000 to 4,000 Zulu warriors.  A record number of 11 Victoria Crosses were awarded to the defenders of Rorkes Drift.  http://www.talana.co.za/Battles_of_the_area/Rorkes_Drift/rorkes_drift.html

We stayed at a place called The Buller in Ladysmith, and set off to find Spioenkop (“Spioen” meaning spy and “kop” meaning hill ) another skirmish between the British and the Boer’s this one on the 23rd and 24th of January 1900.  It’s location 38 km (21 miles) west-south-west of Ladysmith on the hilltops along the Tugela River.  There were 30,000 British against 8,000 Boers – This was a victory for the Boer’s.  http://en.wikipedia.org/wiki/Battle_of_Spion_Kop

From here we drove through spectacularly beautiful towns like Winterton and Mooirivier; stopped and had tea at The Junction and then moved on to Howick Falls.  We were heading for Sani Pass in the Drakensberg Mountains.

From the falls we drove through places like Bulwer and Underberg before we came to a halt at Sani Lodge and oh...wow! What a disappointment this place turned out to be. The location was stunning, but the Lodge was a backpacker’s place, and honestly, I was mortified, but too tired to argue. Instead I enjoyed a couple of glasses of red wine whilst staring at the beginning of “Sani Pass” right in front of my face; I was nervous yet excited about the challenge of driving this pass with Elzette and Ronnie and crossing into Lesotho and spending the day there returning to South Africa before nightfall. 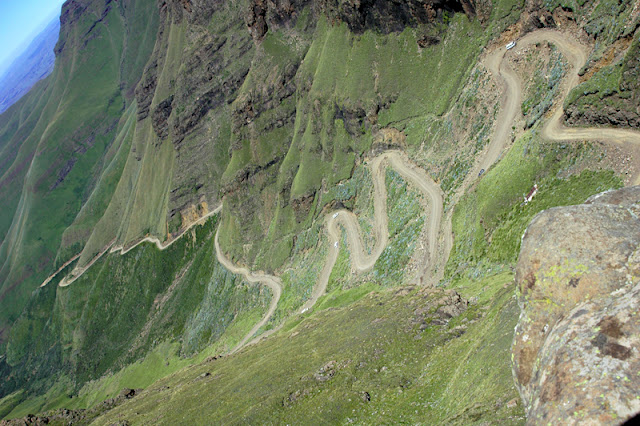 It was a wonderful experience and we decided at the top of Sani Pass that we were not going to spend another night in the backpackers lodge, and that we were going to head back in the direction of Cape Town as soon as we returned to the lodge.  I was ready for a bit more upscale and so was my travelling companions.   We spent the night in Kokstad on a farm at a lovely B&B called Peach Haven.  The next day we headed out right after breakfast we drove through towns like: Matatiele, Mt Fletcher, Maclean, Elliot, Indwe, Queenstown, Tarkastad and Cradock with its beautifully old restored homes.   We spent the night in Somerset East at a friend of Elzette's by the name of Cecile Rice in her lovely home.  The next morning I woke up, said goodbye to Ronnie and Elzette they decided to take a different rout back to Onrus and I pushed my car hard and made it back to Somerset West early that afternoon, home sweet home.