Kapama Private Game reserve’s 13,000 hectares have all the big game of Africa with 42 mammal species and approximately 350 bird species. This equates to vast natural diversity and includes the famed 'Big 5' - lion, leopard, elephant, buffalo and rhino. In this post, we’re going to feature Kamp Karula and Kapama’s Wellness Center.

Kapama occupies a vast area between the northern Drakensberg Mountains and the Greater Kruger National Park. It is the largest single-owner game reserve in the region and is ideally situated to receive guests flying into Eastgate Airport (Hoedspruit). This airport is just minutes from the reserve and Kapama includes free airport transfers in open safari vehicles direct to any of the four lodges in Kapama; Kapama River Lodge, Kapama Buffalo Camp, Kapama Southern Camp and Kapama Karula.  Game drives are conducted through the rolling savannah grasslands and riverine forests that make up this appealing African reserve. 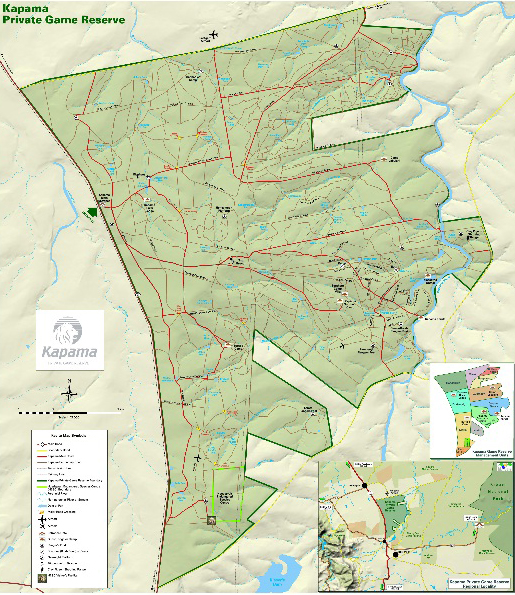 
Kapama Game Reserve had its origin in 1986, when the late Johann Roode purchased his first property in Hoedspruit called Moria farm. The name Kapama originated from a small railway station across the road, and it is believed that Kapama was the name of a chief of a local tribe that lived in the area of Thulumahashe.  The Moria portion of Kapama is where Kapama Buffalo Camp is positioned today. Johann decided to graze Bonsmara cattle on this newly acquired property and soon required more land for the increasing herd.  Another portion of land known as Drakensig was bought, and this is where Kapama River Lodge is now situated.
Cattle farming proved to be uneconomical; the environment was harsh and predators and tics took their toll on the cattle. In 1987, Johan realised that eco-tourism was the only way to sustain this large property. So in 1989 Kapama Lodge was constructed and this was beginning, of what would in time, become one of the leading eco-tourism destinations in the world. More land acquisitions followed, and Kapama has grown to be the biggest single owned Private Game Reserve in the lowveld safari region of South Africa.
In 2002 Johan Roode tragically passed away at the early age of 58 after contracting pneumonia.Johan's wife and mother of their two children, Bernard and Adine, took over the management of the Kapama business; and completed the building of the super-luxurious Camp Jabulani, on the Kapama Game Reserve in 2003. The Roode family decided to re-allocate responsibilities and the Kapama business was divided in two sections. Mrs Lente Roode and her daughter Adine continued to manage and operate Camp Jabulani, as well as the world renowned Hoedspruit Centre for Endangered Species. Johann's son Bernard took control of the other Kapama Lodges. In the tradition of the father, more land was acquired with the last addition to Kapama being a 600 ha portion alongside the Klaserie River, to the north east of the reserve.


To complete the full range of accommodation at Kapama Private Game Reserve, another lodge was built in 2005. This is the acclaimed and exquisitely designed Kapama River Lodge on the edge of the Kapama River. But that's not quite all they realised there was just one thing missing for the real romantics who come to Kapama on honeymoon or for a special occasion! In 2007, they built a Romantic Sleepout Platform far from any of their other safari accommodation, and set it up so that a couple could sleep at treetop level under the stars on a four poster bed lit by lanterns. This is proving to be the coup de grace of Kapama and a romantic safari experience like no other.

Wellness Centre
Exquisitely nestled in the African bush is a piece of paradise designed to uplift your mind, body and soul. Complete with state of the art gym, equipped with cardio and weight training facilities, the centre energizes and uplifts in the healing presence of nature. While connecting with the call of the wild, indulge in a variety of specially designed spa treatments. These include facial, body and beauty treatments.
http://www.kapama.co.za/